This document looks long. Is there a shorter version?

What is Voter Satisfaction Efficiency?

Voter Satisfaction Efficiency (VSE) is a way of measuring the outcome quality a voting method will give. It relies on making various assumptions about what kind of voters and candidates are likely to occur, then running large numbers of elections that are simulated using those assumptions, and measuring how satisfied the average simulated voter is by the outcome in each election.

VSE is expressed as a percentage. A voting method which could read voters minds and always pick the candidate that would lead to the highest average happiness would have a VSE of 100%. A method which picked a candidate completely at random would have a VSE of 0%. In theory, VSEs down to negative 100% would be possible if a voting method did worse than a random pick, but in practice, most real-world voting methods — even horrible ones such as plurality voting — can at least beat that mark.

Previously, a similar idea as VSE was known as “Bayesian Regret” or BR. They are related by the following formula: VSE(method)=1-[BR(method) / BR(Random Winner)]

What are the philosophical underpinnings of VSE?

VSE is based on the idea of “utility”, which is what economists call it when they represent each person’s happiness or satisfaction by a single number. The idea is that voting methods are better insofar as they increase overall happiness/satisfaction.

This ethical framework, if taken to its logical conclusion, is called “Utilitarianism”, often summed up by the phrase “the greatest good for the greatest number”. But you do not have to subscribe to full-blown Utilitarianism in order to use VSE. Even if you think that there are some aspects of ethics that cannot be reduced to increasing a one-dimensional measure of overall satisfaction, you’d still probably agree that all else equal, increasing satisfaction is better than decreasing it, and increasing it for many is better than doing so for just a few.

Note that VSE uses the word “satisfaction” rather than “utility” for two reasons. For one thing, it’s just a more everyday word, and so easier to understand. But for another, it’s important to draw a distinction between a voter’s short-term satisfaction with a given election result, and the long-term utility that they actually derive from the candidate’s actions in office. We have no better choice than to trust the voter and assume that the former is a worthwhile measure of the latter; but that does not make them the same thing.

What assumptions are necessary in order to calculate VSE?

Any evaluation of voting methods involves some kind of assumptions. In the case of VSE, the assumptions are necessary in order to generate voters, candidates, and ballots many times over to run virtual elections. To do that, you need to make assumptions about the following:

Why is VSE a good measure of many aspects of voting method quality?

In the field of voting theory, there are many desirable criteria a given voting method may or may not pass. Basically, most criteria define a certain kind of undesirable outcome, and say that good voting methods should make such outcomes impossible. But it’s been shown mathematically that it’s impossible for a method to pass all desirable criteria (see: Gibbard-Satterthwaite theorem, Arrow’s theorem, etc.), so tradeoffs are necessary. VSE measures how well a method makes those tradeoffs by using outcomes. Basically, instead of asking “can a certain kind of problem ever happen?”, VSE is asking “how rarely do problems of all kinds happen?”.

If the voter model, media model, and strategy model are realistic for a particular context, then VSE is probably a good metric for comparing voting methods. If you find a method which robustly gets a relatively high VSE, across a broad range of voter, media, and strategy models, then you can be confident that it reflects the will of the voters, no matter what that will is. That’s democracy.

What does VSE not measure?

What are the various voter models that were used to get the VSE numbers below?

There are three basic models. The first two are simple but unrealistic; the third is more complex but hopefully more realistic.

Note: As a grad student in statistics, building and working with statistical models is my expertise, so I apologize for the inevitable technicalities in what follows. I’ll try to keep things as understandable for a non-expert audience as I can, but it’s always hard to find the right balance. It’s important to be transparent about how things work and why, but I don’t want to overwhelm you with technicalities.

What are the advantages and disadvantages of each of the voter models used?

What are the strategy models used?

The strategy models include various mixes of the following possibilities:

The Center for Election Science’s GitHub

What voting methods do you test?

OK, can I see some results?

Click to go to interactive versions of the following graphs: 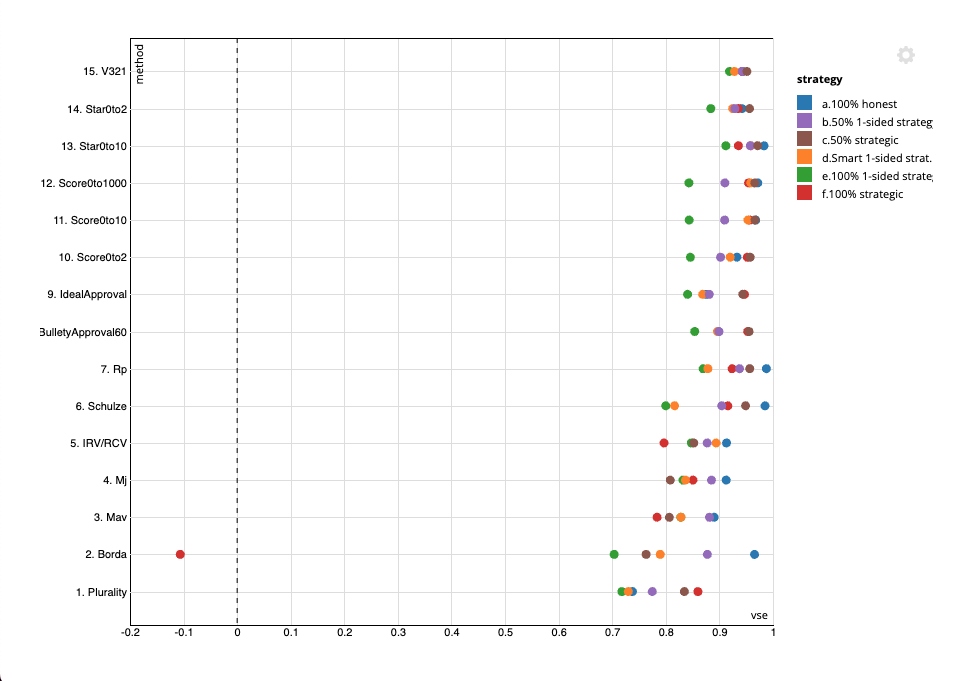 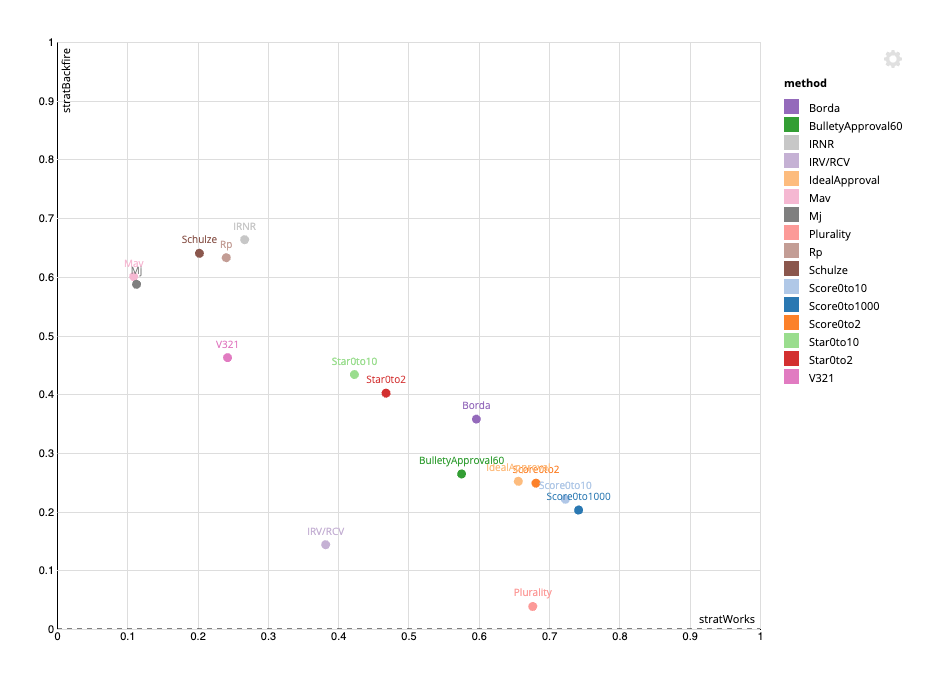 Or, broken down by scenario type:

Those results are broken down by “Scenario type”. Why?

Could you explain the 6 scenario types you use?

The “type classifier” tries to fit each scenario into 5 types in order, labeling it with the first type that it fits. If it fits none of the 5 types, it’s labeled “other”.

Can you summarize the outcomes?